What does color tell you about your passport?

In fact, passport color is often related to the geographic location and policies of each country.

Following the guidelines on the size and format required for passports issued by the International Civil Aviation Organization (ICAO), the governments of each country can freely choose the designs, as long as they carry one of the Four colors: red, green, blue and black. 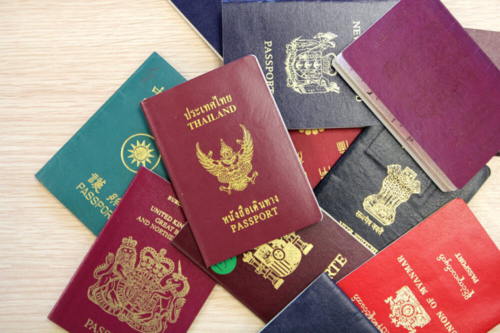 The rankings and regulations, passport policies often attract special attention from the public. When we focus too much on the "power" of passports rather than on aesthetics, it's easy to overlook an important part of the color of this paper. Photo: Reader's Digest.

Green: This color is considered a symbol of nature and life. For some countries, color is often associated with a dominant religion. Muslim countries like Morocco, Pakistan and Saudi Arabia have green passports. Because in Islam, this is considered the favorite color of the Prophet Muhammad, who is said to wear a green robe and turban.

Green is also on the flags of Islamic republics like Iran, Mauritania, Pakistan and Afghanistan. Many African countries like Burkina Faso, Ivory Coast, Nigeria, Niger, Senegal ... also have green passports, mainly because they belong to the Economic Community of West African countries (ECOWAS). ).

Red: This is one of the most common colors on passport of countries around the world.

Hrant Boghossian, vice president of Arton Group, which owns the passport data storage website Passport Index, responded to the Telegraph that the red passport could show that a country was or was communist like Slovenia, China, Serbia, Latvia, Romania, Poland, Georgia.

Many Nordic countries also use a red passport, as this was a common color in the Viking era and appeared on many national flags. Passports of European Union countries, except Croatia, are also burgundy. Turkey, Macedonia and Albania all changed their passport colors to burgundy as if to express their desire to join the EU, according to the Economist.

Blue: U.S. passports today are blue, but this is a design that has only been used since 1976 when the US government decided to change passports from green to blue to match the colors above. Ensign. Between 1993 and 1994, a number of special green passports were issued in celebration of the 200th anniversary of American Consular Services.

Member States of the Caribbean Community (CARICOM) all have blue passports, possibly due to the geographical location in the middle of the ocean. A bloc of South American nations including Brazil, Argentina, Paraguay, Uruguay and Venezuela also use blue passports to show close ties with Mercosur, a customs union.

Black: African countries like Chad, Democratic Republic of Congo, Zambia, Botswana, Burundi, Gabon, Angola, Malawi ... all use black passports - rare colors. However, this color also appears on passports of countries considering black as a national color such as New Zealand.

According to Condé Nast Traveler