The sea itself splits in South Korea

Every year, in the Jindo and Modo waters, a strange phenomenon occurs: the sea suddenly splits into two to reveal a vast dirt road linking the two islands.

Many people when mentioning the famous sea-crossing route all think of the "divine" to find the Jewish holy land led by the prophet Moses. In legend, when pursued by the Egyptian army, Moses used the power to create a land path through the Red Sea to rescue his people.

Until now, many people still think that such roads only appear in myths. The reality has proved the opposite: the whole world has a place like that. It is a large rocky road connecting the two islands of Jindo and Modo in Korea with the phenomenon of the sea splitting in two full of mystery and attractiveness. 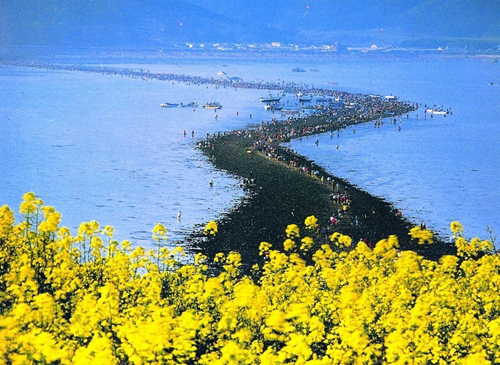 On some days of the year, when the tide reaches an extremely low level, the waters between the islands of Jindo and Modo in Korea split themselves in half, revealing the road connecting the two islands.

This road in the middle of the vast sea spends most of the year sleeping deep in the deep ocean. However, every two to three times a year (usually around March and June), it rises above the surface and becomes the most popular tourist attraction in Korea.

According to local people, the road is about 2.9 km long and about 40 m wide. In the days when the phenomenon of the sea split in half to reveal the road between the sea, it welcomes hundreds of thousands of tourists to visit. Together they go on the magic road, leisurely admiring the scenery, taking souvenir photos or even catching shellfish, snails, seaweed ... without fear of the road being dropped or happening unexpectedly. what. 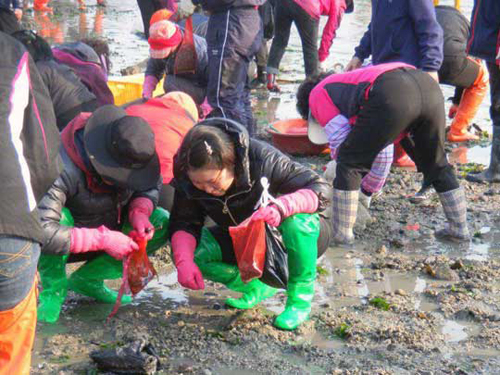 In the days when the sea splits itself, hundreds of thousands of visitors in all places flock here to go on the road associated with ancient legends, catching shellfish, snails, seaweed together.

This bizarre path and extremely interesting phenomenon became a secret treasure of Korea until 1975, Pierre Randi - the French ambassador at that time - experienced the feeling of seeing the sea split in two. . He described what he saw in a French newspaper and called it "the miracle of Moses". Pierre's story at that time caused a lot of controversy among scientists as well as people in Europe.

Many people at the time considered Pierre a liar. It all ended when French scientists came to Korea to "expose" Pierre. In the end, they witnessed this unique phenomenon with their own eyes and admitted the existence of the road in the sea.

The reason until 1975 the phenomenon of sea splitting in half was known to the world public that indigenous people were used to this. They believed too much in an ancient legend that it felt completely normal and nothing to make noise or need to inform everyone.

According to Korean legend, in ancient Jindo Island people were often harassed by tigers. They enter the village and eat the people. Facing that situation, everyone had to flee to Modo island. Poor old lady Bbyong is the only survivor of that migration. 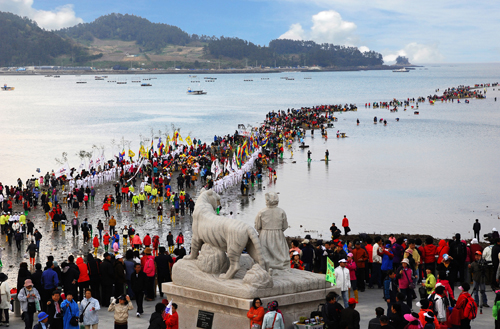 At this place, we can easily see the large statue of a woman standing next to a tiger, reminiscent of a famous Korean legend.

In the days living on Jindo island with fear of tigers, Bbyong prayed to the sea god day and night for help. Moved by the poor plight of the woman, the sea god Yongwang warned that a "rainbow in the sea" would help her escape.

The next morning, the miracle happened when Bbyong went to the sea. Water suddenly split in two and a path appeared in the middle of the vast ocean. Thanks to the road connecting Modo island, the old woman was reunited with her family.

Today, Koreans still tell their descendants and tourists about this mythical story. However, in the eyes of legendary scientists is evidence that is never sufficiently convincing. According to Kevan Moffet, an associate professor of geosciences at the University of Texas, the US tide is one of the causes of the split sea phenomenon.