Surrounded by high mountains, strong winds, short runways, Paro airport is among the most dangerous in the world.

About 54 km from the capital Thimphu, Paro Airport is located in a deep valley on the banks of the Paro Chhu River, west of Bhutan. The ridges of the Himalayas reach over 5,500 meters around the airport, making it one of the most difficult aircraft to land in the world. 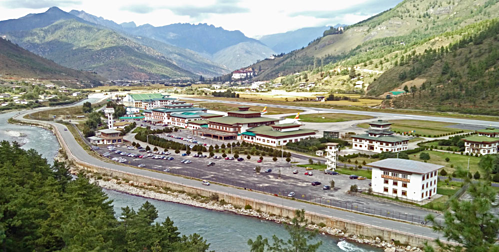 The only international Paro airport in four airports in Bhutan. There are two buildings, one is an air traffic control tower, the other is a place where passengers check in and waiting rooms for departure. Photo: Stocks.

Strong winds in the valley often make the aircraft wobble when approaching this airport. The short runway requires experienced pilots and flexibility to control the aircraft. According to Forbes, by November 18, there were 17 pilots trained enough to perform breathtaking landing at Paro airport. Previously, this figure was 8 pilots in 2011.

Planes can only arrive or leave this airport during the day. Because the runway was completely out of sight of the pilot before they flew a 45-degree angle through the ridges, dropping quickly to land. At a certain time, the plane's roar is almost close to the houses on the top of the mountain. A red-roofed house on a cliff is an important marker for the captain to determine the landing line. 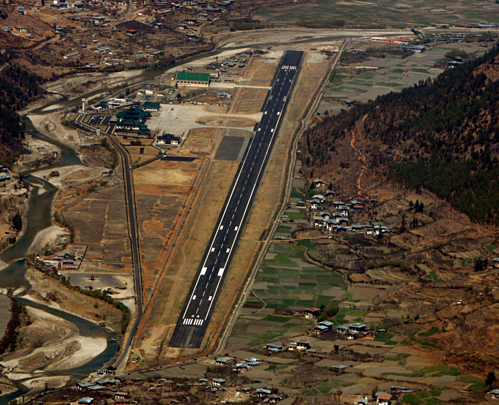 The runway of Paro airport is shorter than conventional runways (about 3,000 m). Photo: Desmond Boylan / Reuters.

Previously, the original runway was 1,200 m long. Therefore, the Bhutanese government sets special standards for the type of aircraft that can operate at Paro airport. It must be a small 18-20 seat aircraft, with high maneuverability, acceleration and rapid elevation.

Buddha Air became the first international airline to operate routes at Paro Airport in August 2010. Tashi Air, Bhutan's first private airline, was born in December 2011. By 2018, the airport has welcomed nearly 400,000 passengers and more than 6,700 flights. A new runway is built in parallel with the old one, allowing the airport to handle up to 50 flights per day.