Suddenly in the diamonds, gold diamonds of the Tsar

Fabergé Easter Eggs are made of gold, diamonds and gemstones, and inside there are many surprises for both givers.

The Easter tree carries 10,000 eggs
Decipher the mystery of the giant statues on Easter Island

For over a century, the name Fabergé has been associated with wealth, luxury and the most expensive Easter eggs in the world. Fabergé Easter eggs are still considered the most elaborate decorations in the world, something tourists should not miss when visiting Russia.

Eggs are made by the Fabergé Jewelry Company, operated by Peter Carl Fabergé. In the early 1880s, Tsar Alexander III attended an exhibition of handicrafts and was fascinated by the work of this goldsmith.

Fabergé eggs come in a variety of sizes, from 7 to 12 cm tall. They are handmade, using expensive materials such as gold, diamonds and precious stones. Each egg has a unique design and takes 1-2 years to prepare. Normally, the eggs are open and the inside contains a surprise, such as a portrait or tiny clock.

In 1885, Fabergé ordered the first Easter egg from Tsar Alexander III, as a gift for his wife, Queen Maria Feodorovna on the occasion of Easter. The egg was inspired by 18th-century ornaments, the outside has a shell made of gold coated with milky white enamel. When opened, it reveals the first surprise is the golden yolk. Continuing the yolk, a yellow hen with ruby ​​eyes appeared. Inside the hen hide the third surprise is a crown and pendant, but both of these are now lost. 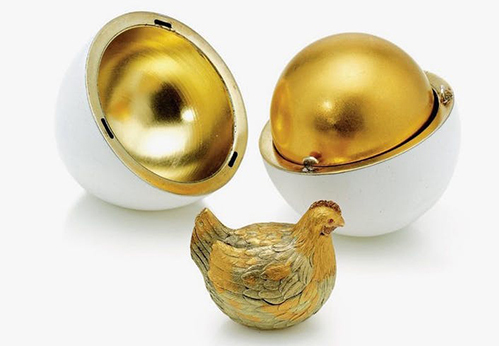 The first Royal Easter Eggs are now on display at the Faberge museum. Photo: AFP.

So excited about the first egg, Tsar Alexander III ordered Fabergé to make Easter eggs every year. After his death, his son Tsar Nicholas II also followed the tradition of giving Easter eggs to his wife and mother. In total, Fabergé made 50 Easter eggs for the Russian Royal Family. These eggs are also known as Royal eggs.

The most expensive Fabergé egg ordered by the Romanov family is called Winter with the shell made from more than 1,600 diamonds and quartz, platinum, moon stone. Inside is a flower basket with more than 1,300 diamonds. The value of this egg in 1913 was 24,700 rubles. In 2002, it was sold for $ 9.6 million in an auction in New York (USA). 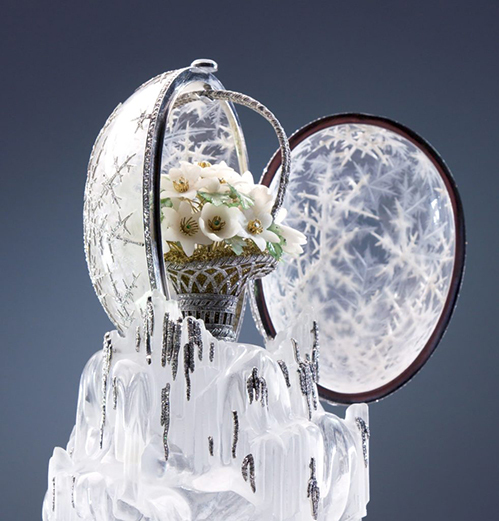 Winter Egg was given to Mother Mother by Tsar Nicholas II. Photo: All About History.

When the Russian revolution broke out in 1917, Fabergé Jewelry Company was dissolved. Some Royal eggs are missing, currently there are 43 left. Today, most of them are kept at the Kremlin Armory museum in Moscow and the Fabergé museum in St. Petersburg. Petersburg.

In the Armory museum, visitors can admire 10 Royal Easter eggs. The highlight is the Azov Memory egg containing a model of the cruiser of the same name, and the Trans-Siberian Railway egg decorated with a map of the Russian Empire, inside a small train.

The Fabergé Museum is home to a collection of Easter eggs collected by businessman Viktor Vekselberg, with nine Royal eggs and six Fabergé eggs made for other customers. 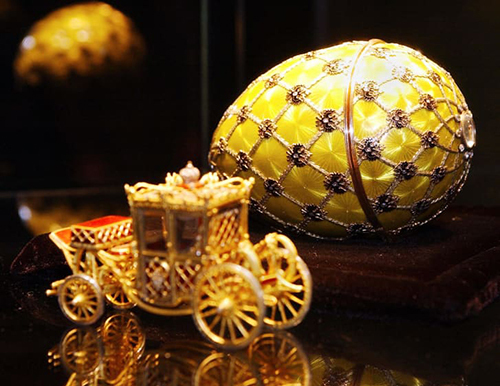 The egg, named Crowned by Tsar Nicholas II. Eggshell modeled on the texture of the queen's gown, inside was the carriage that took her to the coronation place. Photo: AFP.

In addition to admiring, visitors to Russia can buy Fabergé Easter eggs as a souvenir. They are sold at the Hermitage museum (St. Petersburg) for between 35 and 700 USD. In addition, churches and souvenir shops also sell this type of egg, though not as sophisticated and often do not contain surprises inside.