Recreate 100 dishes in the feast of King Kangxi

CHINA Dishes based on the famous royal banquet in Chinese history are introduced to diners in Macau.

"The Royal Ban Han - Han" is now served at Fook Lam Moon restaurant with sea cucumber, wild goose, pigeon eggs, turtle legs, bird's nest soup ... This is a menu to recreate the legendary feast in Chinese history has contributed to stabilizing the country and has been unprecedented in history. 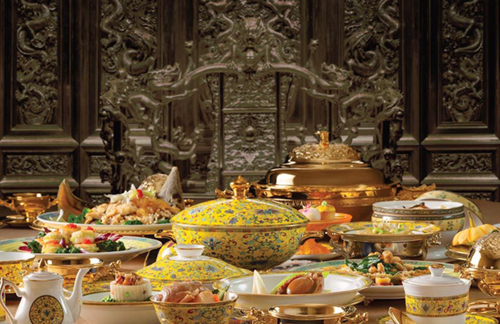 Banquet table based on the dishes in the "Royal Banquet Manchurian - Han". Photo: Galaxy Macau.

It was a three-day banquet organized by King Kangxi (1654 - 1722) on his 66th birthday. At this time, the Qing court arose a conflict due to a power dispute between the Manchu and the Han. Therefore, the party was also the occasion when King Kangxi defused the situation. The menu includes 320 dishes, reconciling the cuisine of Han and Man, by two groups of chefs.

The Manchu party in the north is usually a joint meat meal. Anyone who keeps ordering more meat will be applauded. But anyone who can't eat even a single plate of meat will be despised. On the other hand, Han people are proud of the fact that the cuisine has a complex combination of many ingredients and spices, creating a diverse and rich dish.

The party kicked off with pork and sea cucumber soup, crab and shark fin, seaweed and pork. The dishes of the next batch include braised bear's feet with carp's tongue, steamed camel hump, soft shell turtle and silkworm. The last meat dish to be brought out is grilled ape, milk porridge and chopped pigeons. The dessert that ended the party was dried fruit.

A stone banquet table was inspired by the famous party of King Kangxi. Photo: Sohu.

Through many parties, the Manchu and Han people became harmonious and opened a period of peace and prosperity throughout China. As a result, the Man-Han party became a powerful symbol of reconciliation and unity.

Kangxi is famous for luxurious parties. Earlier, he had repelled the threat to China's northern border by holding a series of "Mongolian vassals Banquet" in the Forbidden City. This form is thought to be in line with China's prosperity at the time as well as its political goals.

The royal banquet Manchu - Han later went into Chinese history and inspired the goldsmiths. They simulated outstanding dishes from famous parties. They even carved bear's legs, turtles and fish from rare stones and presented it as a banquet table in shows about minerals and gems. The term "Manchu - Han Toan Tich" or "Royal Manchu - Han Banquet" currently refers to certain ostentatious meals or gala dinners. 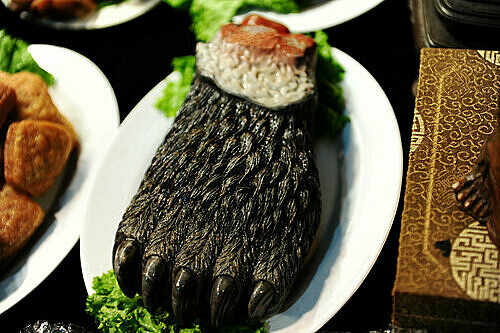 After the Qing Dynasty collapsed in 1912, restaurants scrambled to hire chefs in Ngu Thien Phong, who could make a royal feast for their customers. Other foodies are constantly trying to restore this menu.

In 1977, the restaurant in Hong Kong simulated a three-month party at the request of Tokyo Radio and Television. 160 chefs together create more than 100 "original" dishes. In 2010, customers had to pay $ 54,000 to be able to enjoy 268 dishes in the royal banquet at Cui Yuan restaurant in Beijing.

Fook Lam Moon restaurant in Macau will serve the royal banquet until the end of 2019. They claim the dishes are the closest to the official menu recipe in history. However, no recipe or menu has been officially recognized so far.