How do Japanese love cats?

Cats have a special place in Japanese culture, even with cat islands for tourists to visit.

For Japanese people, cats are more than just pets to keep a kitchen away from mice. Cats have long existed in Japanese culture, believed to bring good luck and good things. In Japanese folklore, there are many folk tales about cats. The most famous legend is the talented cat (Maneki Neko) who saved the lives of two samurai from danger. In addition, this animal also appears in Japanese folk paintings.

Visitors can buy the talented cat Maneki Neko as a lucky charm for relatives when coming to Japan. Photo: Gift for the orients.

Japanese people love cute things, and cats possess these advantages, rooted in their behavior. The Japanese call the cat cute "tsundere". In it, the word "tsun" means "arrogant and aristocratic", and the word "dere" is "naughty". The aristocracy and arrogance come from the shy, unapproachable and cautious nature of cats. However, at unexpected times, they naturally become cute or pampered people.

The popular image in Japanese culture is the fabled cat Maneki Neko, which is located in almost every shop and shop with the desire to have everything convenient and prosper. Besides, cat images are also used for decoration. In Japan, there is a Shinkansen high-speed train called "Hello Kitty" with images of this cartoon character appearing from outside to inside the train. 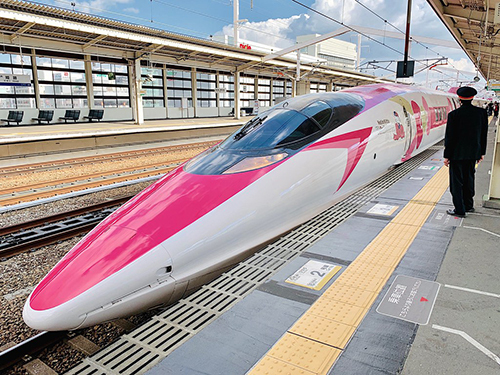 Cats are not only raised in families, they also appear everywhere, associated with the daily life of the Japanese. Cat-related businesses are considered to be a good business in the land of the rising sun.

Festival and island dedicated to cats

Not only is it in the business, cats are also the theme of the Japanese festival, on February 22. The festival originated in 1987 with the idea of ​​a cat food company in Japan. In Japanese "February 22 or 2, 2, 2" is called "ni, ni, ni" and translates into "nyan, nyan, nyan" which is the sound of cats. This pronunciation is similar to the way the Japanese ninja call. So on this day many people wear ninja costumes, even at work. This is also the occasion for people to express their love for this animal in many ways, in addition to eating cat-shaped dishes. 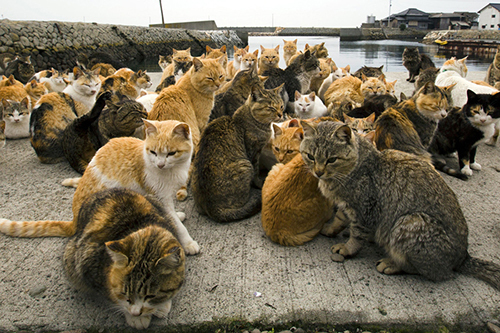 From cats brought to the island to catch rats, there are now more than 120 cats in Aoshima. Photo: Rove me.

In Japan there are more than 10 cat islands. One of them is Aoshima (in Ehime Prefecture), where only a few dozen people but about 120 cats live on the island.

Guests can take a round-day ferry from Nagahama port to Aoshima. When you arrive on the island, you should have snacks and a small bottle of water available because there are no convenience stores or vending machines on the island. In addition, you can bring a little food, toys for cats to close and play with cats.