1,000 won (approximately 20,000 dong) is the lowest denomination in the Korean banknote system. If there is a junk food paradise in Vietnam, in Korea, the country with the world's leading developed economy, which delicacies can you eat?

A cup of breaded chicken balls (cup chicken) costs 1,000 won and is always a favorite dish of young Koreans when they run out of money and still want to eat something. The paper cup is about half the height in the palm of the hand. It contains 5-6 pieces of chicken balls coated with fried flour and some topokki rice cakes and fries. The fillings are often stirred with sweet and spicy sauces and sprinkle with mustard honey sauce after putting in the cup. 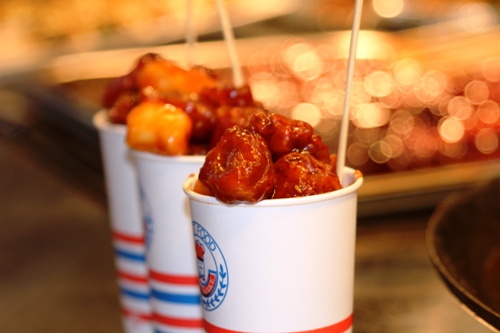 This dish is often sold in mobile carts on sidewalks near universities. Processing and seasoning may vary slightly depending on the owner. In addition, you can also buy a larger cup for 2,000 won (40,000 VND) or want to buy for many people, you should choose a box that costs 5,000 won (100,000 VND).

Odeng is a dish of skewers with main ingredients of fish, flour and eggs, quite familiar because it appears frequently in Korean feature films. You often see people standing in front of a smoky stall and enjoying the skewers of food on the spot. Odeng skewers are usually processed and packaged, shippers only need to boil it and sell it to customers. A skewer usually costs 500 won (10,000 VND). 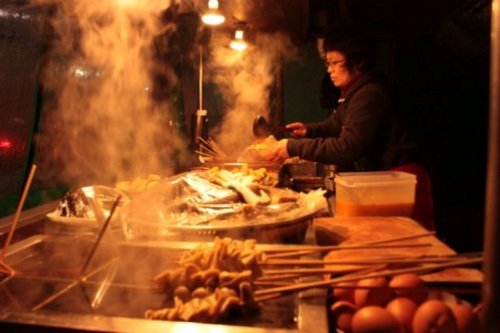 Odeng can be eaten immediately or added soy sauce soy sauce according to each person's taste. Oodeng broth is also very rich, you can pour water into a paper cup and drink as much as you want. Cold winter evenings in Korea, many people on the road just stopped to eat an odeng skewers and drink a cup of delicious hot soup comes.

A roll of gimbab rolls on the spot usually costs 2,000 won (40,000 dong) or more. But if there's only 1,000 won left, you can still buy gimbab rolled up in convenience stores. The feature is that the filling is not as fresh and plump, but the taste is also not bad and quite good for a quick meal. 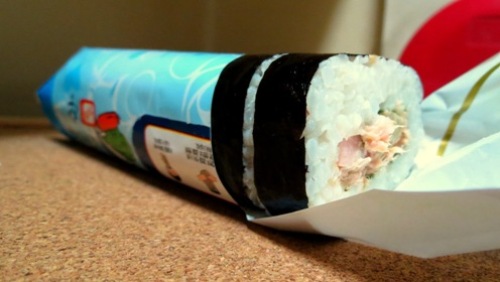 The hotok is quite similar to the pancake (a flat cake made of flour), which is also a flour mixture that is fried but has filling inside. The 1,000 won type usually only has a honey filling, in addition there are red bean paste, fried vermicelli, etc. but a bit more expensive. The hot cake will be stored in paper cups for you to walk and eat at the same time. This is also a very popular traditional snack in Korea. 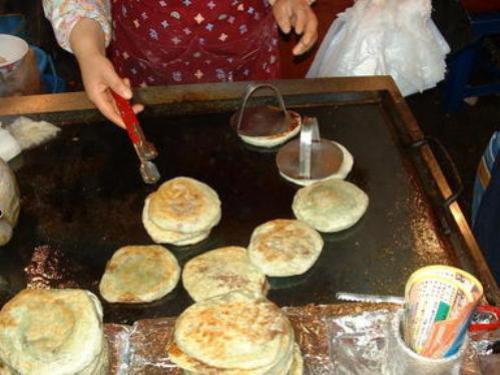 The hotok cake is being processed. Photo: Naver.

It would be a pity if you haven't tried a dessert for only 1,000 won. A waffle is enough to satisfy your sweet tooth. Of course, at the affordable price, the cake is quite thin and has less flavor or ice cream, but it is not too delicious. However, it is hard to resist the aroma emanating from the popular waffle shops located near the subway stations and schools. 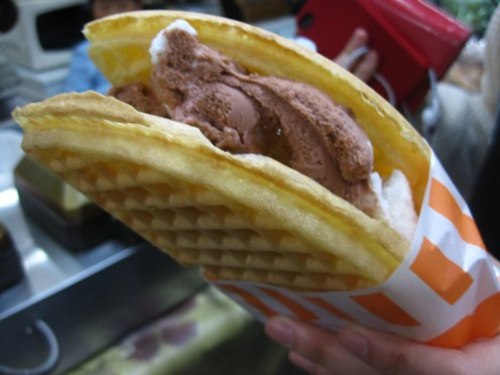