About 6,300 guests of eight yachts are sailing at sea, including Greg Mortimer, which has more than 100 people infected with nCoV.

Greg Mortimer, from Australia's Aurore Expeditions, sailed off Uruguay for two weeks. On the ship, there were 217 people, up to 128 people were positive for nCoV.

The boat finally arrived at the port of Montevideo on April 10, based on an agreement between the two governments. More than 110 Australian and New Zealand passengers aboard, whether negative for nCoV or infected, were escorted directly to the Montevideo airport runway to return home on the morning of April 11. On board were still 80 crew members and about 20 European and American passengers waiting for testing.

The Uruguayan government considers all passengers aboard the infected Greg Mortimer, even before they have been tested for Covid-19. "There was practically no contact between people during the return and return process," the Uruguayan official said. Shipping company Aurore said it will pay all costs for passengers, while the New Zealand government will accept its citizens from Melbourne. 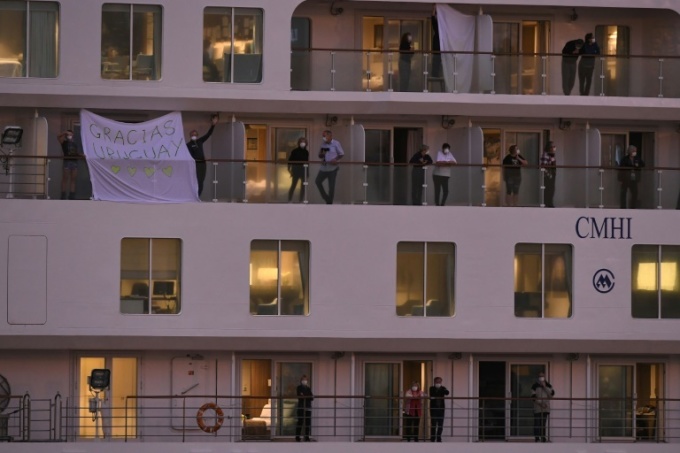 Passengers hang a "Thank You Uruguay" sign when the yacht was approved by the country's government to dock at Montevideo on April 10. Photo: AFP.

Sharing the scene with Greg Mortimer, Zaandam - a cruise ship of Holland America, left Argentina on March 7, starting the luxurious 31-night vacation of hundreds of passengers. But since March 22, more than 1,000 people have been locked up on yachts.

Since March 30, the yacht has recorded nearly 200 flu-like infections, many of which were positive for nCoV, 4 of which died. Countries do not allow ports, Zaandam stuck at sea, even the final destination, the city of Fort Lauderdale (USA), also refused. The tragic days of the ship only ended when the state of Florida rescued.

Greg Moitimer or Zaandam are two of dozens of ships "stranded" in the ocean because of the pandemic. At least 6,300 passengers were still on board the yachts when Covid-19 was raging globally. According to CruiseMapper data, the ship tracking page, the number of passengers on the 8 yachts, including Greg Mortimer, Pacific Princess, Queen Mary 2, Arcadia, Astor, Magnifica, Columbus and Costa Deliziosa. nCoV pushed the billion-dollar yacht industry into crisis

Pride of America, of the Norwegian shipping line, can accommodate more than 2,000 passengers, often traveling around Hawaii and generating $ 1.3 million in revenue a week. But one day in March, a crew member contracted Covid-19 and spread it to others. Hundreds of passengers stuck on the train, others were evacuated. From 900 employees, the yacht decided to lay off 700 people.

Large shipping lines like Norwegian allow their employees to work four days a week and cut their salaries on shore by 20%. Meanwhile, Royal Caribbean director Richard Fain said it would not take pay until September and cut 25% of the pay for other executives.

Global sales of ship travel in 2018 reached US $ 50 billion. But Covid-19 engulfed it all. The world's three largest shipping lines, Carnival, Royal Caribbean and Norwegian, which account for 80% of the global market, have stopped their entire journey. Initially, shipping lines were forecast to be suspended for at least one month. But now, firms have had to extend the downtime.

The UK and US governments have advised passengers over 70 years old, the main target of cruise lines, not to join any cruise for health reasons. Many countries do not welcome yachts. Canada banned large cruise ships from docking until July 1. Many countries did the same when Covid-19 spread.

The pandemic struck during the most extraordinary time in the yachting industry when the first three months of the year were thought to be peak. And 2020 is expected to break all the bad records because the three largest corporations have no revenue. The stock price of shipping lines has dropped by 70-80% since the beginning of the year, compared to about 60% for airlines and 30% for the US stock market in general. Not to mention, the downturn of cruise lines has greatly affected tourist ports.

However, the three big men will probably survive because of good financial balance. Analysts say that, even if there is no revenue for six months, they still live because they have enough money without relying on any rescue plan. March 31, Carnival plans to raise $ 6 billion through the issuance of new shares and bonds in case of longer shutdown. 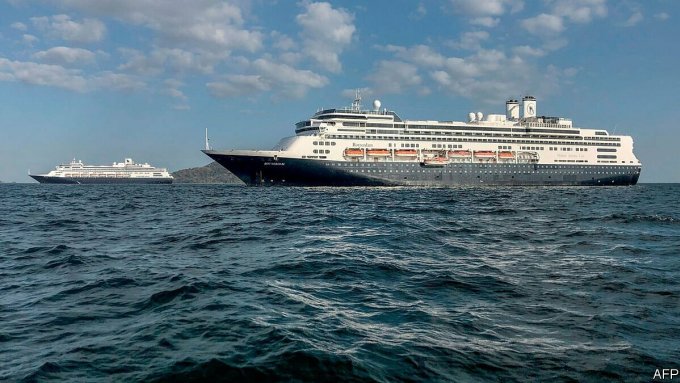 However, not all businesses in the yacht industry have a strong financial background. Small-scale shipping lines cannot stand long, as Luminous Cruise Japan filed for bankruptcy as early as March due to lack of passengers.

Last week, the US $ 2,000 billion stimulus package removed the yacht industry from the list. Because most carriers are not established in the US and do not pay income tax. In addition, the yacht industry has been criticized for causing environmental pollution and slow response before a pandemic. That is a major challenge for shipping lines, because if the crisis lasts longer than expected, they will not be able to endure more.

But the most important issue is that when the pandemic passes, it is difficult for tourists to return to the cruise lines immediately. They have other options instead of sailing at sea. Young people do not like this form of tourism.

Leaders of shipping lines are having a headache on how to get their main guests, the elderly, to step back on the yachts, when in their minds they still imprinted with the image of the rejected ships that could not dock. .