Bamboo forest - the place associated with the great invention of Edison

Few expect the special connection between Edison and Yawata City, Kyoto is the bamboo on Mount Otokoyama.

The incandescent light bulb, the perfect invention of Thomas Edison, helps to illuminate homes around the world. He received respect from all over, but especially for the Japanese people. According to Plain Dealer, Japanese people make up the largest proportion of visitors to Edison's childhood home in Milan, Ohio (USA).

The bond between Edison and Japan is quite unusual. The scientist has a particularly deep relationship with the residents of Yawata City, Kyoto Prefecture when he erected an Edison monument at Iwashimizu Hachiman Shrine on top of Mount Otokoyama. Yawata is also considered a sister city to Milan, where Edison was born. Since the early 1980s, many friendship gifts have been exchanged. 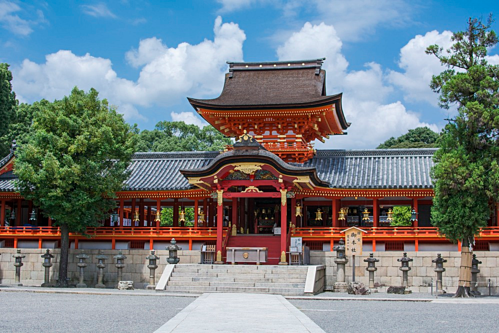 In 1878, Edison began to study and experiment with incandescent light bulbs. The principle of operation of the lamp is to use electricity to burn a thin strip of material, or filament, hot enough to glow. Many inventors tried to perfect the incandescent light bulbs, but they had an extremely short lifespan. Other materials are too expensive to apply on a commercial scale. At this time, finding a good material for incandescent light bulbs was a big challenge that Edison himself overcame.

Edison searched for materials with large resistors and high melting temperatures to extend the life of the filament. After testing thousands of materials from platinum to hair, Edison discovered that the carbon fiber contained the conditions he needed. He decided to try making a filament of carbonized cotton, and the light bulb shone for 14 hours, setting a record for the time. Edison quickly applied for a patent, which describes that carbon fiber can be made from many different materials such as cotton, linen, sticks, paper ... rolled in many different ways.

Edison consistently experimented with carbonized organic materials in his lab. He contacted biologists and asked them to send different types of plant fibers from the tropics. He also sent workers around the world to find the perfect material. Edison estimates that he conducted experiments with more than 6,000 types of vegetables.

William H. Moore, an Edison worker, sent him a sample taken from a bamboo forest near Iwashimizu Hachiman Shrine in Kyoto in 1880. This bamboo species originated from China and Japan, hollow stems were used to make flute, crafting works of art or crafts. Edison had seen a bamboo fishing rod on a trip in Wyoming (USA) two years earlier. Scientists have found that the carbon fiber after carbonization is the best material to make a filament. 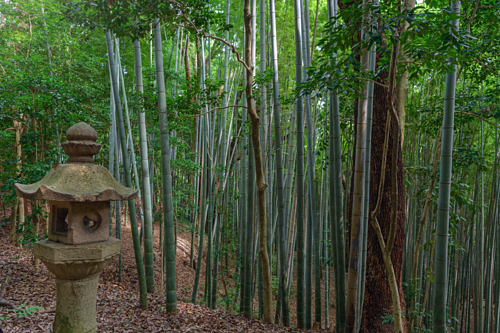 Bamboo forest near Iwashimizu Hachimangu Shrine in Kyoto. Bamboo from this area was used to make filament for the first bulbs. Photo: mTaira.

To create these silk threads, the bamboo stem is split into super-thin strands and bends like a hairpin or ring. They are covered with a layer of carbon powder and baked in high-temperature furnaces for several hours and allowed to cool. In this process, the bamboo fibers will move from the cellulose structure to pure carbon structure, ready to attach to the glass bulb.

Due to the length of the filament, the bulbs were not much brighter than candles but they could burn longer regardless of the filament of other materials at the time. Some Edison bulbs can burn for more than 1,200 hours. Carbon filament lamps were popular until Hungarian scientists, Alexander Friedrich Just and Franjo Hanaman, successfully researched tungsten filament in 1904. In 1911, Edison's General Electric Company switched to tungsten. 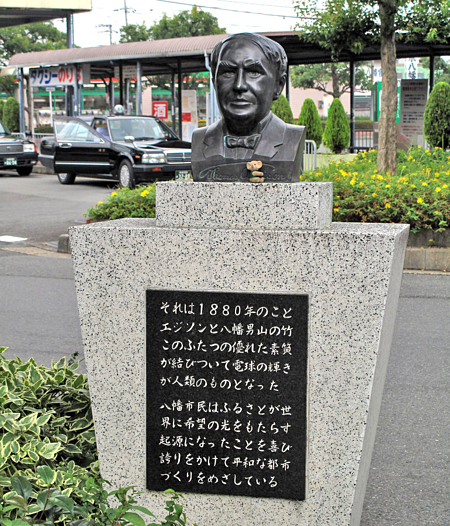 At the foot of Mount Otokoyama, there is also a small shopping mall called "Edison Street" with a bronze statue depicting the portrait of American scientist. Photo: Douglas Sprott / Flickr.

Edison died in 1931. Three years later, the Thomas Alva Edison memorial was built in the precinct of Iwashimizu Hachimangu. In 1964, Madeleine Edison Sloane, Edison's daughter, had the opportunity to visit this place. She was deeply moved when she saw the monument to her father and affirmed that there was no such monument in America.

Every year, on the anniversary of the birth and death of Edison (February 2, 1847 to October 18, 1931), a light festival takes place at Iwashimizu Hachimangu Shrine. Traditional bamboo lanterns will light up the monument and the American national anthem is played.